Hello everyone, this post is about global wind patterns. Hopefully it may help us understand this topic better! :) 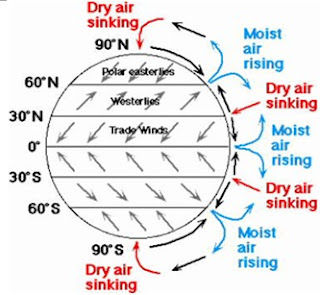 A big layer of air called the atmosphere surrounds the Earth. The air within this layer moves from place to place when it warms up or cools down. This moving air is known as wind.
All of these winds are part of a global air circulation system that acts to balance temperature and pressure around the world. In addition, winds move moisture and heat around the world and also produce much of our weather.

Energy from the Sun heats the entire Earth, but this heat is unevenly distributed across the Earth's surface. Equatorial and tropical regions receive far more solar energy than the mid-latitudes and the Polar Regions.
The tropics receive more heat radiation than they emit, while the Polar Regions emit more heat radiation than they receive. In the other words, there is a net loss of solar radiation in the higher latitudes and a net gain in the tropics. If no heat was transferred from the tropics to the polar regions, the tropics would get hotter and hotter while the poles would get colder and colder. This latitudinal heat imbalance drives the circulation of the atmosphere and oceans.  (Around 60% of the heat energy is redistributed around the planet by the atmospheric circulation and around 40% is redistributed by the ocean currents.)
As equatorial areas are heated most, the air above them warms and rises as it becomes lighter than the surrounding air, causing an area of low pressure. In cooler areas, the air sinks because it is heavier and results in an area of high pressure. Winds will blow as air is squashed out by the sinking cold air and drawn in under the rising warm air. Any difference in temperature like this will always cause a difference in air pressure – and therefore winds will blow. A good expression to remember is that:

"Winds blow from high to low" (i.e.: from high pressure to low pressure). 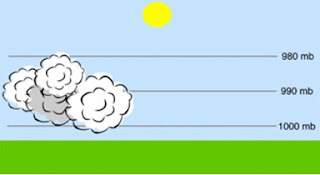 Figure 1: Cross-section of the atmosphere with uniform horizontal atmospheric pressure.

In this first diagram (Figure 1), there is no horizontal temperature or pressure gradient and therefore no wind. 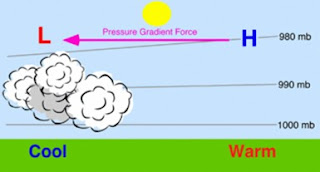 Figure 2: Development of air flow in the upper atmosphere because of surface heating.

In the second diagram (Figure 2), the potential for solar heating is added which creates contrasting surface areas of temperature and atmospheric pressure. The area to the right receives more solar radiation and the air begins to warm from heat energy transferred from the ground through conduction and convection. The vertical distance between the isobars becomes greater as the air rises. To the far left, less radiation is received because of the presence of cloud, and this area becomes relatively cooler than the area to the right. In the upper atmosphere, a pressure gradient begins to form because of the rising air and upward spreading of the isobars. The air then begins to flow in the upper atmosphere from high pressure to low pressure. 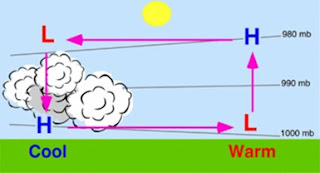 Figure 3: Development of a closed atmospheric circulation cell because of surface heating.

Figure 3 shows the full circulation system in action. Beneath the upper atmosphere high is a thermal low pressure centre created from the heating of the ground surface. Below the upper atmosphere low is a thermal high created by the relatively cooler air temperatures and the descend air from above. Surface air temperatures are cooler here because of the obstruction of short wave radiation absorption at the Earth's surface by the cloud. At the surface, the wind blows from the high to the low pressure. Once at the low, the wind rises up to the upper air high pressure system because of thermal buoyancy and outflow in the upper atmosphere. From the upper high, the air then travels to the upper air low, and then back down to the surface high to complete the circulation cell. 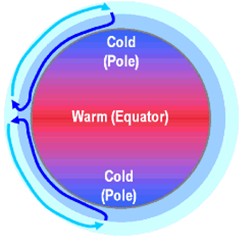 One way to transfer heat from the equator to the poles would be to have a single circulation cell where air moved from the tropics to the poles and back.  This  model was first proposed by Hadley in the 1700’s.   Figure 4: Single-cell circulation

Since the Earth rotates, its axis is tilted and there is more land in the Northern Hemisphere than in the Southern Hemisphere, the actual global air circulation pattern is much more complicated. Instead of a single-cell circulation, the global model consists of three circulation cells in each hemisphere. These three cells are known as the Hadley cell, the Ferrell Cell and the polar cell. 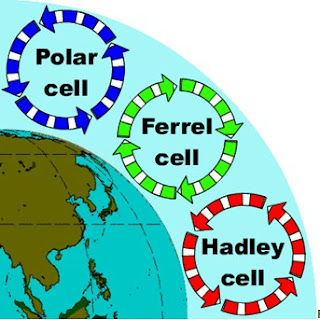 1. Hadley cell - This is the cell that is closest to the equator.  It consists of winds converging and rising at the equator and then diverging north and south of the equator as it reaches the upper troposphere.  The winds then sink at 30 degrees latitude as they converge with winds in the Ferrell Cell.  They hit the surface and diverge back to the equator to complete the cell.

2. Ferrel cell - This cell has winds sinking at 30 degrees latitude and then travelling pole-ward as they hit the ground and diverge with winds from the Hadley Cell.  These winds travel towards the poles until they converge with winds in the polar cell at 60 degrees latitude.  These winds then rise up and spread out equator-ward to complete the cell. 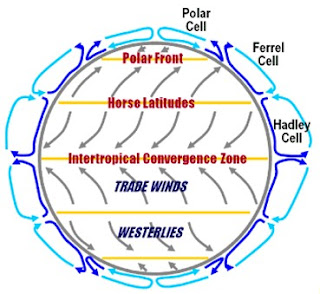