The hydrologic cycle is the journey water takes as it circulates from the land to the sky and back again. It is a conceptual model that describes the storage and movement of water between the biosphere, atmosphere, lithosphere, and the hydrosphere. Water on our planet can be stored in any one of the following major reservoirs: atmosphere, oceans, lakes, rivers, soils, glaciers, snowfields, and groundwater. Water moves from one reservoir to another by way of processes.
Components (processes and terms) of the hydrologic cycle and their definitions:
Putting everything together:
The total quantity of water on the earth remains essentially constant. Water moves about from high ground to low ground, changing location and form (vapor, liquid, solid) as part of the hydrologic cycle. Water vapour in the atmosphere condenses due to the cooler temperature to form clouds (condensation).  Water is delivered to the earth as precipitation (rain or snow) and then seeps into the ground (infiltration) or travels over the ground (surface runoff). Some of the water moving over land or in streams and lakes is lost to the atmosphere as water vapour through evaporation. In addition, plants extract water from the ground and release it to the atmosphere as water vapor (transpiration). Water loss to evaporation and transpiration are referred to collectively as evapotranspiration. Water that has seeped into the soil moves along as through flow and water which runs off to streams moves as stream flow. J
A simple diagram to illustrate the hydrological cycle: 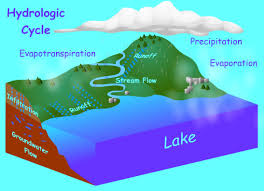 A good website for further reading on hydrologic cycle:
http://www.eoearth.org/article/Hydrologic_cycle 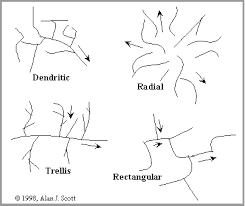