Hey peeps! Sry I can’t post as much as Sylvia either.. X)
Heat budget system
The heat budget system is important to earth as it helps to keep us warm, and thus makes earth habitable. Therefore, we cannot live on mars or any other planets because this system (including other cycles) is absent, and hence the planets cannot maintain a suitable temperature.
The heat budget system must be balanced.  If not, the earth will either heat up or cool down too much. If it is balanced, there would be a constant temperature.
Shortwave reaches the earth as (1-4microm) ultraviolet light, infrared and light radiation entering the earth’s system. This gets reflected back into space by clouds, air particles and land surfaces. Long wave radiation (longer than about 4 microm) is heat, which becomes either trapped in the atmosphere or lost to space.
30% of the sun’s rays are immediately reflected back into space. 20% heat the earth’s atmosphere, leaving only 50% to heat the land and oceans. If the rays don’t escape to space, the earth would be too hot for humans or animals to survive. 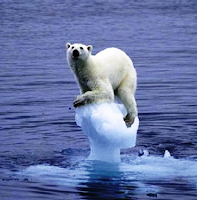 The carbon cycle actually interacts with heat budget. Hence, there is no balance, and the earth heats up. This leads to global warming. This would lead to harm of the environment. For example, polar ice caps would melt with global warming. When polar ice caps melt, the heat budget would also be affected because the ice helps to reflect light. Global warming would also cause strange weather. When the earth heats up, the gas would expand. As a result, it takes up more space and rises. This causes high and low pressure in the air, which results in wind.
Several cycles are present to control the climate on earth. 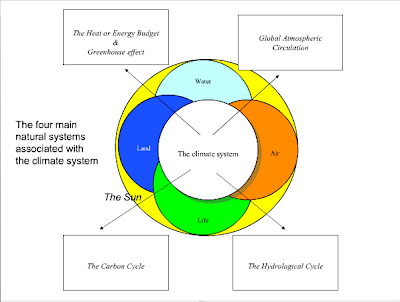 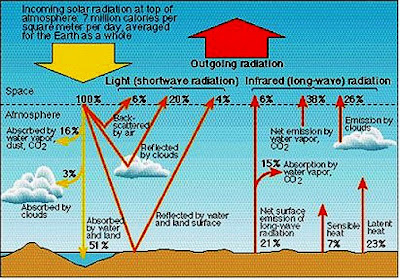 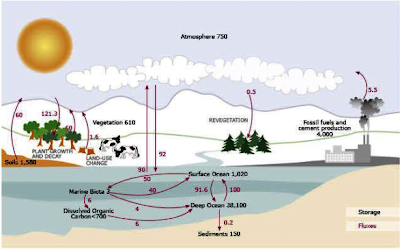 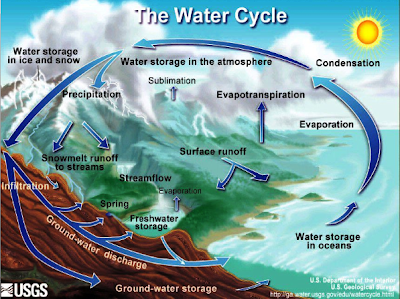 The water cycle
(sry for the small pictures. the layout of the blog doesn't allow me to post bigger ones. anw, if you cant see clearly, just enlarge the whole thing :))
Some terms:
Latent heat: Energy released or absorbed to change a substance to gas.
Sensible heat: Visible to the naked eye such as steam from a cup of coffee
Albedo: Ability of an object to reflect light and radiation.
-yithan
Posted by 405 at 6:57 PM